The one-hour riveting play, “The Mountain Top,” begins with prophetic words from Martin Luther King, Jr’s final speech given in Memphis, TN on April 3, 1968, from which the play derives its name. But the unique power of this play begins to emerge when it quickly transitions from that high point to a very human portrayal of Dr. King (played by Dominic Carter). We see a tired King wearily opening the door to a hotel room like people away on business were doing across the United States that night. The rest of the show takes place on a set that looks remarkably like room 306 in the Lorraine Motel where King spent the last night of his life. King asks his best friend Reverend Ralph Abernathy to run out and get his favorite brand of cigarettes reminding him not to get the cheap ones. And finally, a hotel maid named Camae (played by Jess Washington) brings coffee to a man she refers to as Preacher King. 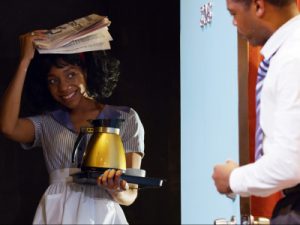 Camae is many things to Dr. King in this play. She is an object of his attention at first because of her physical beauty and he flirts with her. But she quickly becomes a truth teller and eventually something more as she helps him grapple with his mortality. Washington brilliantly manages all of these different roles in the play with ease, believability and humor. Her comic timing is impeccable. One moment she is smoking cigarettes with Dr. King and swearing like a sailor in front of the famed Baptist preacher and the next she’s wearing King’s jacket standing on one of the hotel beds preaching an impressive version of what she would say if she were King. She is his verbal and intellectual equal sparring with King about various topics including his sexism, his marriage, his ego, his stubbornness, God, Malcolm X, and his commitment to non-violent philosophy.

As for Carter, he takes on with vigor the task of playing the larger than life figure Martin Luther King, Jr. From the moment he walks on stage, he captures King’s essence physically and emotionally. Including how by 1968 King is worn out, exhausted and experiencing what he calls “moods” that make it difficult for even his closest associates to be around him. Yet, as the play unfolds, we also see the humor and kindness of King revealed and Carter’s performance never loses sight of King’s commitment to justice nor his faith in God.

The play has a surprising amount of good humor and covers a remarkable number of topics effectively in a short amount of time. It also does a good job of balancing the more familiar story of King with Camae’s unexpected and moving personal story that led her to be with Dr. King on the last night of his life. Still, looming over the show is the reality that no matter how hard King tries he is still going to die on the balcony of the Lorraine Motel on April 4, 1968. Assassinated by a white man. 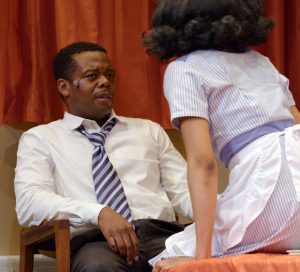 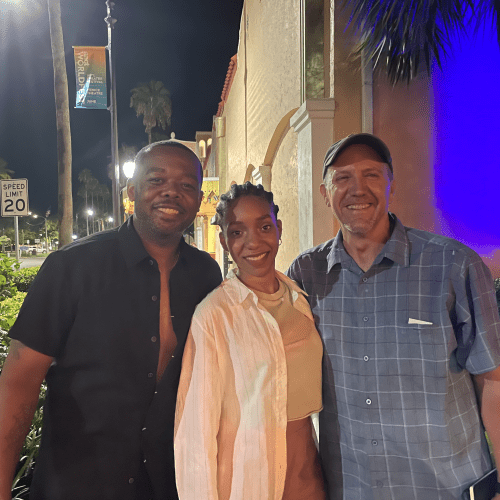 Evan Farrar is the Pastor of Congregational United Church of Christ in Sarasota. He obtained his M. Div. from Union Theological Seminary in New York City. Evan has had a long personal interest in the life and ministry of Martin Luther King, Jr. and while at Union he studied under the late Dr. James H. Cone. An influential African- Theologian, Cone’s books included "Martin & Malcolm & America: A Dream or a
Nightmare?"

You can email him at pastorevan@congregationalucc.org.