“Les Perroquets de Bangui” translates from French to “Parrots of Bangui,” and the troupe has flown from Bangui, their nation’s capital, landing in Venice, Florida to present what is surely one of the most innovative, disturbing, and – yes, amusing — presentations ever of a history marked by foreign and domestic oppression, human rights abuses, civil war, coups and blood.

Without a drop of gore, a talented trio presents a performance that could be a masterclass in physical comedy. Once again, aactWORLDFEST proves that theatre transcends language. Please don’t tell my French professor of long ago that all I could pick up was an occasional “oui” or “s’il vous plait,” but the actors’ energetic antics don’t require a knowledge of French (phew!), although if their dialogue was half as witty as their physical comedy, it would be well worth understanding.

Les Anciens Combattants translates to “war veterans,” and when the trio’s energetic performance was interrupted by newsreels of the nation’s struggle for justice, I felt guilty that I had been laughing uproariously seconds before. Images – some fairly recent of military brutality, poverty, wartime violence, and most heart wrenching of all, children cradling and using weapons of war. Sobering, shocking, and sadly, still the fabric of this nation. The United Nations ranks it 150 out of 150 in its inequality-adjusted Human Development Index, translating to, in part, that the Central African Republic is considered the world’s unhealthiest country and the worst country in which to be young.

Against this backdrop of horror and sorrow, the joyful performance of Les Anciens Combattants is a testament to the power of human resistance and theatre. This year’s WORLDFEST is richer for Les Perroquets de Bangui, and their insistence that laughter is one of the most
powerful weapons we have in our arsenal against evil is nothing short of inspirational. 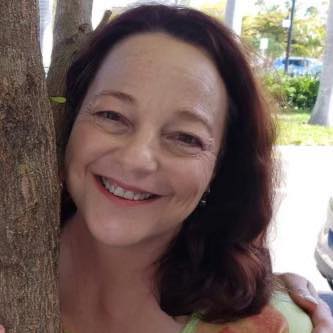 A retired Episcopal priest, Lisa "Lucy" Hamilton is an active volunteer at Venice Theatre on and off stage. She especially enjoys working with Pinky's Players and on the paint crew. She holds an MA in creative writing and a second MA in journalism, both from Indiana University.