In David Javerbaum’s satirical comedy “An Act of God,” the almighty is not quite who you have been told or believed for most of your life.

He is a troubled being with “wrath-management issues,” one who appears unbothered by death and not ready to confront major issues such as why we must face cancer or war.

In a show that is like a serious-minded stand-up comedy act, God mostly wants to set the record straight, to explain where we have been led astray when it comes to familiar Bible stories and even the birth and life of Jesus. And he is ready to unveil a new set of 10 Commandments to help us put less stress on God and have more faith in ourselves.

“Thou Shalt Not Tell Me What to Do” is one of those commandments. He’s fed up every time someone says “God forbid,” or “God bless you.”

And please don’t bring him into sports and show business. 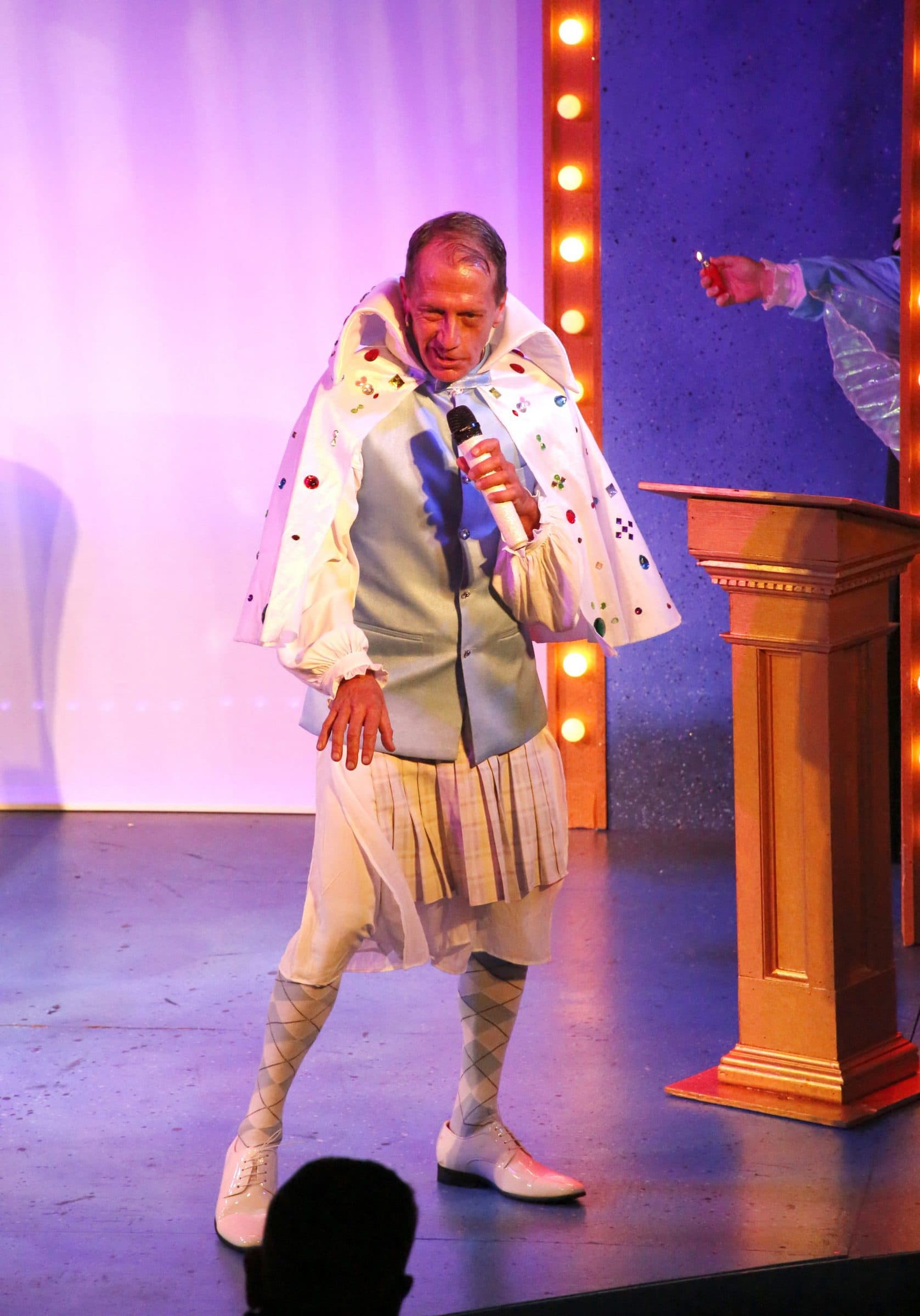 “I can say with no ambivalence: Leave Me out of sports. I say with some ambivalence, leave Me out of showbiz. Kanye, next time you win a Grammy and you thank Me for your ‘God-given talents,’ they’re gonna get God-taken, understand?”

His favorite word in the English language is “amen,” because “when I hear it I know you’re finally done asking Me for stupid” stuff. (He actually uses stronger language.)

In the Venice Theatre production that opened a new season Friday night in the Pinkerton Theatre in front of a fully masked audience, God appears in the person of Brad Wages, who is more recognizable as a director and actor.

Wages is energetic and engaging, but the laughs don’t come naturally. It’s almost as if he and director Dennis Clark are trying too hard to win over the audience, and in the process, expected laugh lines fall flat and are funnier discussing after the fact.

In one scene with Debi White as the loyal and obedient archangel Gabriel, Wages can’t stop laughing about the story of Noah and the ark and how ridiculous it is.

“I did not ask Noah to put two of every animal on board the ark and the reason is simple: It makes no sense. I mean, how would they fit?” He and White break into giggling fits without triggering the same response among audience members.

It’s a recurring problem throughout the show. I chuckled a few times and appreciated the humorous irony and perspective in Javerbaum’s script but didn’t find myself laughing out loud.

While issuing his new commandments, God also addresses things we might not have known about key stories, such as an alternative version of the Garden of Eden and who first inhabited it.

There’s a slight gay undercurrent in tone throughout the show (with joking references that might puzzle a few in the audience) as God insists that he’s not homophobic.

Patrick Mounce plays the angel Michael who roams around the audience presumably asking questions from patrons about the meaning of life or which came first: the chicken or the egg. Mounce relishes the opportunity for Michael to ramp up the tone, trying to force God to address some serious issues, and Wages is at his best in the kind of angry responses we don’t expect from the almighty.

The play is staged on a set by Tim Wisgerhof that suggests an ethereal game show (fitting for a play that uses “Family Feud” as a recurring theme), and costume designer Maureen S. Demers outfits the three actors in a patchwork of blue jackets, white skirts and argyle socks that make you think of religious garments.

Javerbaum, a former “Daily Show” writer and creator of the Twitter account @TheTweetofGod, does give you plenty to think about. Those open to new points of view can’t help but think they have some merit, and how much better off we might be if we listened and started putting more faith in ourselves. 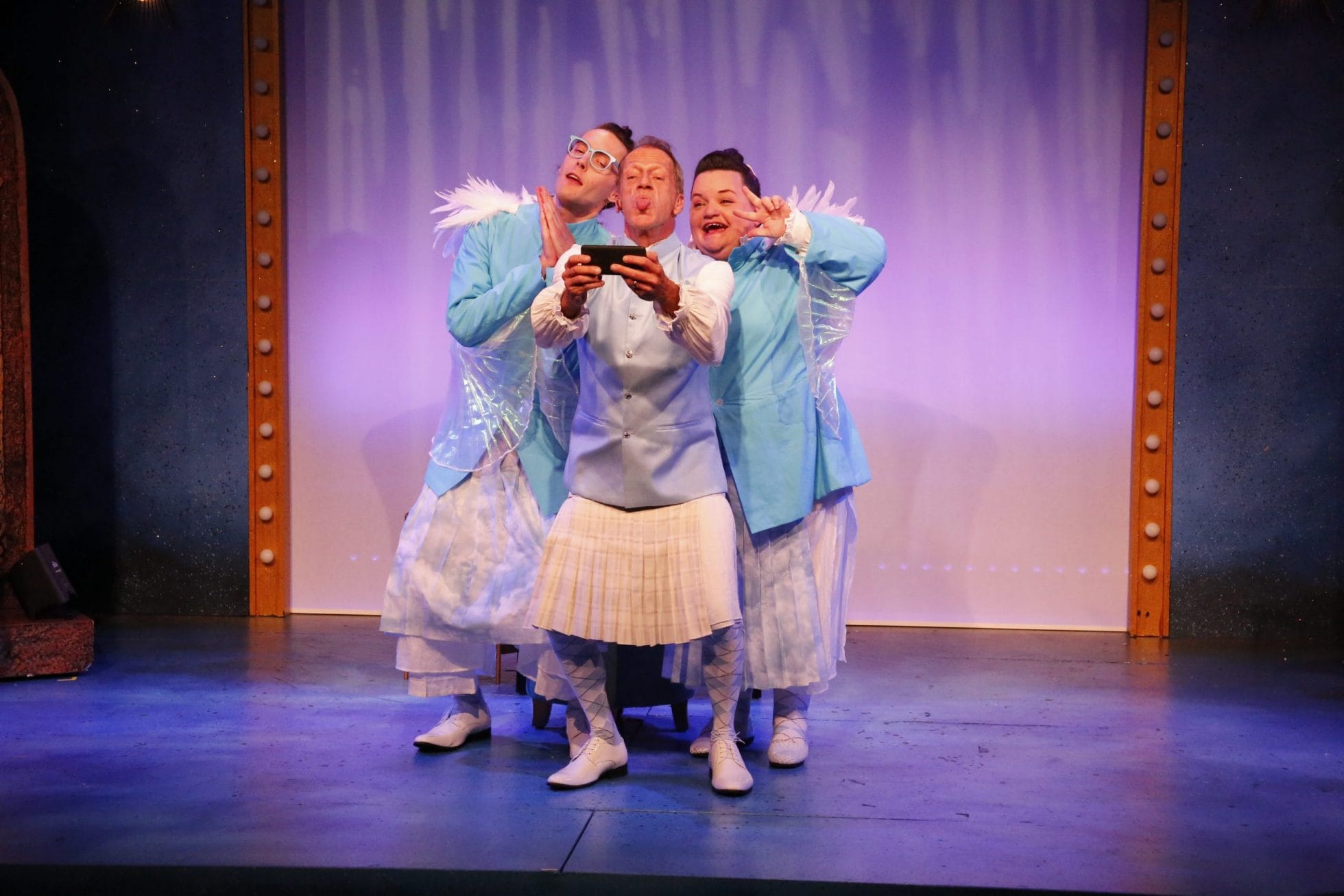 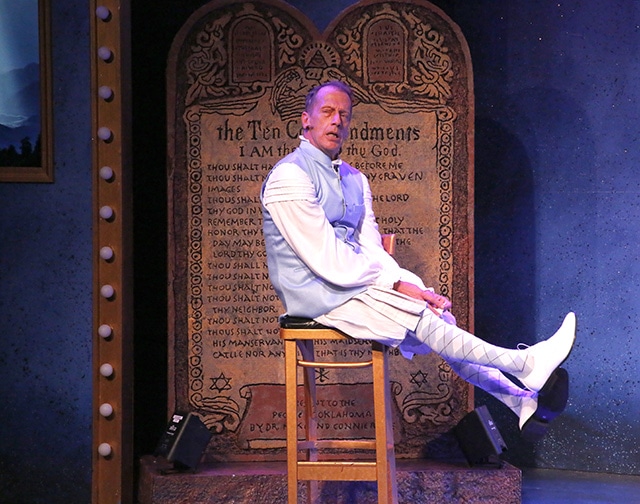