Musical based on a 1933 film runs through March 24

From the moment the curtain partially rises on Venice Theatre’s “42nd Street” to reveal just the legs and feet of its dancing cast members, tap shoes fly across the stage. From that opening number through “We’re in the Money” and an expansive and expressive version of the title song, choreographer Geena Ravella keeps her ensemble busy and sounding much larger than it is.

The percussive sounds of the taps reverberate through the theater, creating thrilling moments in this musical that is a loving tribute both to old show business traditions and the glories of film director Busby Berkeley, whose 1933 Warner Brothers movie musical inspired the show.

“42nd Street” is a backstage look at the efforts of director Julian Marsh to make a comeback during the Depression with a splashy new musical called “Pretty Lady.” After his leading lady takes a tumble, he pressures Peggy Sawyer, a brand new chorus girl he has just fired, to take over the role and save the jobs of all the others.

“Do it for ‘musical comedy,’ the two greatest words in the English language,” Marsh tells Peggy before launching into a rousing version of “Lullaby of Broadway.” It’s a persuasive argument, underscored by all the cast members joyously doing kicks and stretching out their arms in time to the popular Harry Warren and Al Dubin song.

So what if Peggy only has 36 hours to learn two dozen songs and a lot of dance routines. She’s young and eager.

The story is told with broad strokes in the script by Mark Bramble and Michael Stewart, triggering laughs by playing off our perceptions and awareness of the past and how things are today. The chorus is told to be at its best because audiences are paying an outrageously high $4.40 a seat.

Director Steven Flaa has staged a smoothly run show as if to heighten the more caricaturish nature of the roles, where a more grounded approach might work better. Many lines are accompanied by sweeping hand gestures and exaggerated expressions, though less could mean more on stage.

Still, it all comes together, thanks to the strong, commanding performance of Tim Wisgerhof as Marsh, who is going to ramrod his show to Broadway if it kills him. Wisgerhof doesn’t have much of a voice for his two songs, but he is convincing as the driven director who will do anything to get it right.

Ashley Figlow is sweet and charming as Peggy, the girl who arrives off the bus from Allentown, Pennsylvania, ready to conquer Broadway. By the end she makes you believe she is ready.

Dawn Carpenter, who usually plays much friendlier roles, lets out her inner diva as Dorothy Brock, the tormented and demanding star of “Pretty Lady.” Tim Garner plays the tenor Billy Lawlor as an unrelenting flirt with enthusiasm and a big voice that is tested in the pageanty song “Dames.” Charlotte Crowley brings a wisecracking and no-holds-barred style to her role as writer Maggie Jones. 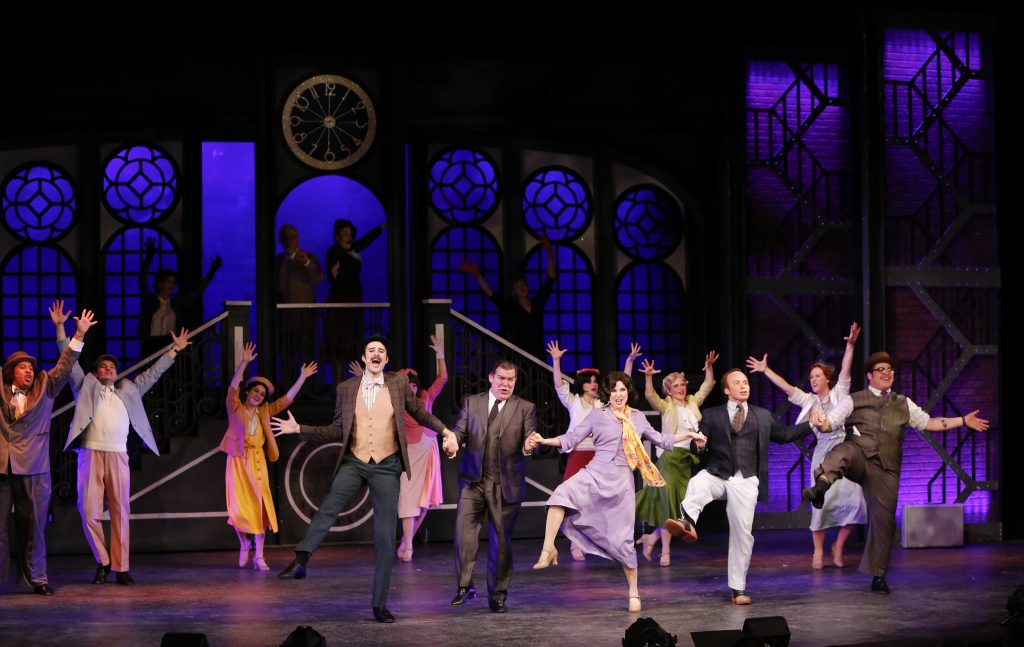 Brian Finnerty shines as the dance captain Andy Lee, who leads the chorus through tap routines and displays the kind of effortless ease that you wish everyone had. The dancers know what they’re doing, but Finnerty does it with a bit more finesse and never lets you see how hard he may be working.

Ravella’s dance routines are reminiscent of the originals created by Gower Champion, while allowing for the varied skills of her ensemble.

In addition to playing Marsh, Wisgerhof has designed a beautiful set that impresses at first sight with the art deco-ish sign for “Pretty Lady” hanging over the curtain, and brick-backed fire escapes suggesting old theater spaces on either side of the stage. His designs make good use of the space, and they work well with Amanda McGee’s pretty costumes, which look casual for rehearsal scenes and add a lot of glamour for parties and production numbers. John Michael Andzulis’ lighting nicely plays with focus and color to add an extra sparkle to some of the numbers.

The cast members are accompanied by a lively orchestra, led by Denise Hoff, that sounds a little over-amplified. The musicians play one familiar song after another with the same kind of enthusiastic joy you get from the actors on stage.