Venice Theatre ‘Mamma Mia’ puts a smile on your face

The hit ABBA musical has its area premiere at Venice Theatre

I can see the production list for “Mama Mia!” now: Disco balls? Check. Breathtaking lights and sets? Check. Outrageously sumptuous costumes including glow-in-the-dark neon? Check and check. Add to that list plenty of beefcake, cheesecake, the fabulous ABBA songs and you’ve got it all, that is, if you’re not picky about things like plots and story lines.

Audiences might be surprised to know that the composers Benny Andersson and Björn Ulvaeus, from the popular band ABBA, were not initially enthusiastic about the idea for a jukebox musical built from their song catalogue. They were persuaded by producer Judy Cramer, who brought playwright Catherine Johnson and director Phyllida Lloyd to create the original London production. “Mamma Mia!” became one of the first successful female creative collaborations in musical theater history.

“Mamma Mia!” debuted on Broadway October 18, 2001, the first musical to open after Sept. 11, 2001. Audiences flocked to the box office and waited at the stage door, wanting to connect with cast members, thanking them for bringing life and even hope back to New York City. On opening night, many of the firemen went with their families to see the show.

Now it has arrived at Venice Theatre, in the musical’s area debut.

The Mamma in “Mamma Mia!” is Donna Sheridan, 20 years on from her career as a pop singer and running a cute taverna on a small Mediterranean island. Her daughter, Sophie, is getting married, and there’s all manner of mayhem coming her way. Her girl group is coming to reunite, and Sophie, the little scamp, has invited three of Donna’s ex-flames, assuming from Mom’s diary that one of the men might be her biological father.

As Donna, Lisa Figueroa has the charm required to power this show. Despite struggling vocally during Friday’s opening night, Figueroa manages to ignite the stage with her megawatt appeal.

Almost stealing the show is Belle Babcock’s Sophie, a charismatic ingenue with a phenomenal pop Broadway sound, perfectly suited for the ABBA catalogue.

I say “almost stealing the show,” because the ensemble is the true star of this production. What makes “Mamma Mia!” work are the production numbers. Every time the ensemble enters the stage, the energy explodes. I could have watched them all night.

Superbly choreographed and directed by Brad Wages (the men’s flipper chorus to “Lay All Your Love on Me” is hilarious), the pacing is tight. The ensemble is excellent under the musical director of Michelle Kasanofsky and there are several stand-out voices. But the orchestra tends to overpower many of the singers, making it difficult to hear dialogue during some of the songs.

Wages skillfully packs the show with goodies from the opening number to the finale. A side note to those audience members who ran out of the theater at “the end” — you missed the best part of the show. The extended curtain call with a medley of ABBA favorites, is staged with some of the night’s most outrageous costumes.

Notable performances include Sky, played splendidly by Beckett Pfanmiller, Sophie’s husband-to-be; Ruth Shaulis and Andrea Keddell as Rosie and Tanya, Donna’s pop-singing cohorts (whose comic chops are as fun as their singing); Donna’s gentlemen callers, Sam, Bill and Harry (Chris Caswell, Joseph Giglia and Ken Basque), all go about their business diligently and with the requisite cheer.

Lighting design by John Michael Andzulis and scenic design by Tim Wisgerhof were sumptuous, eliciting applause at the opening of the show. Summer Lee Jack’s costumes are their own kind of spectacle in a fabulous Cher/Bob Mackie kind of way.

The plot is flimsy and nonsensical, but “Mamma Mia!” doesn’t really require things like plots or exposition, because it has the music of ABBA. Who worries about a silly story when you are bopping along to “Take A Chance” or “Dancing Queen.” That’s what “Mama Mia!” is all about. It’s a show that puts a smile on your face and a song in your heart. 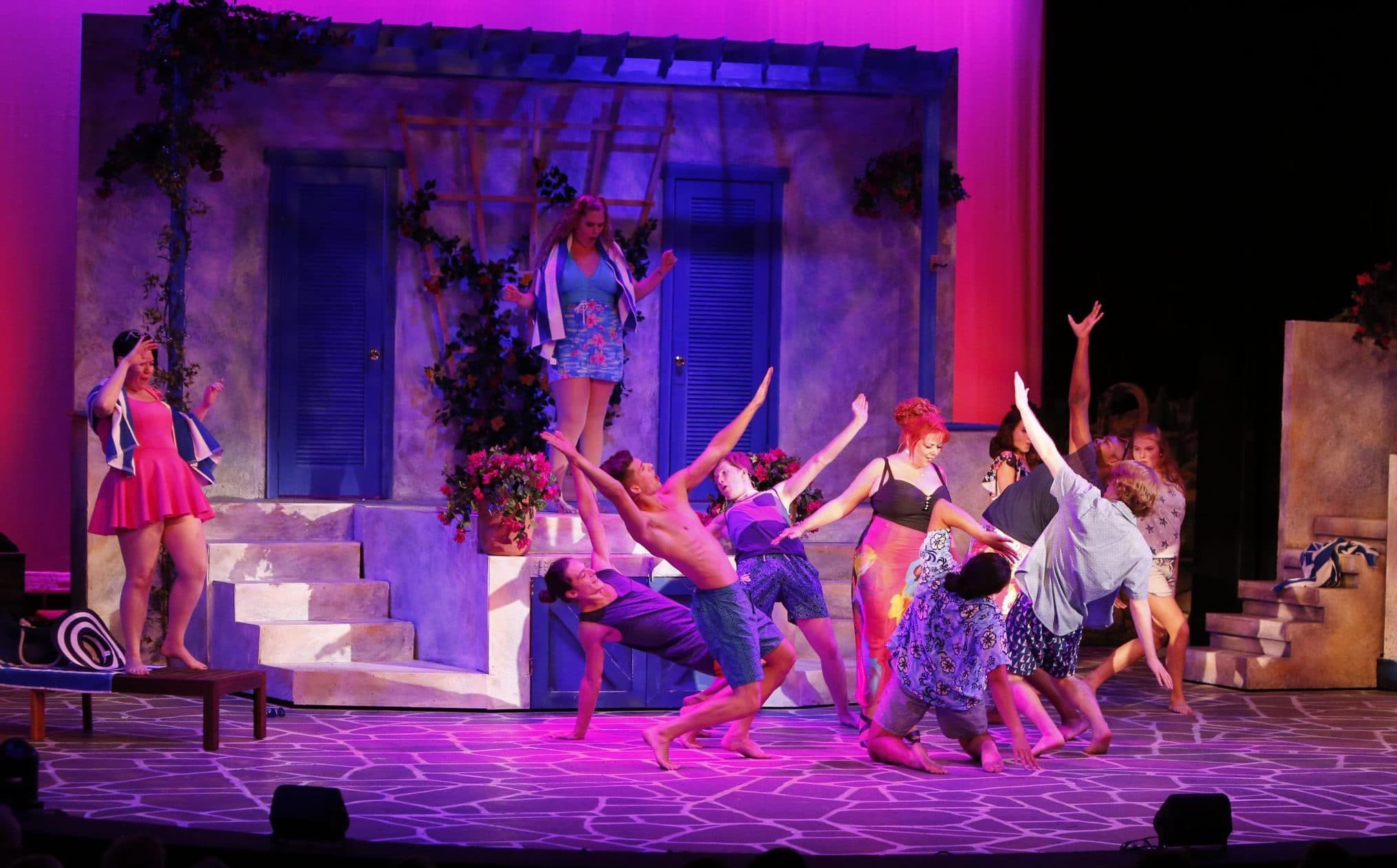 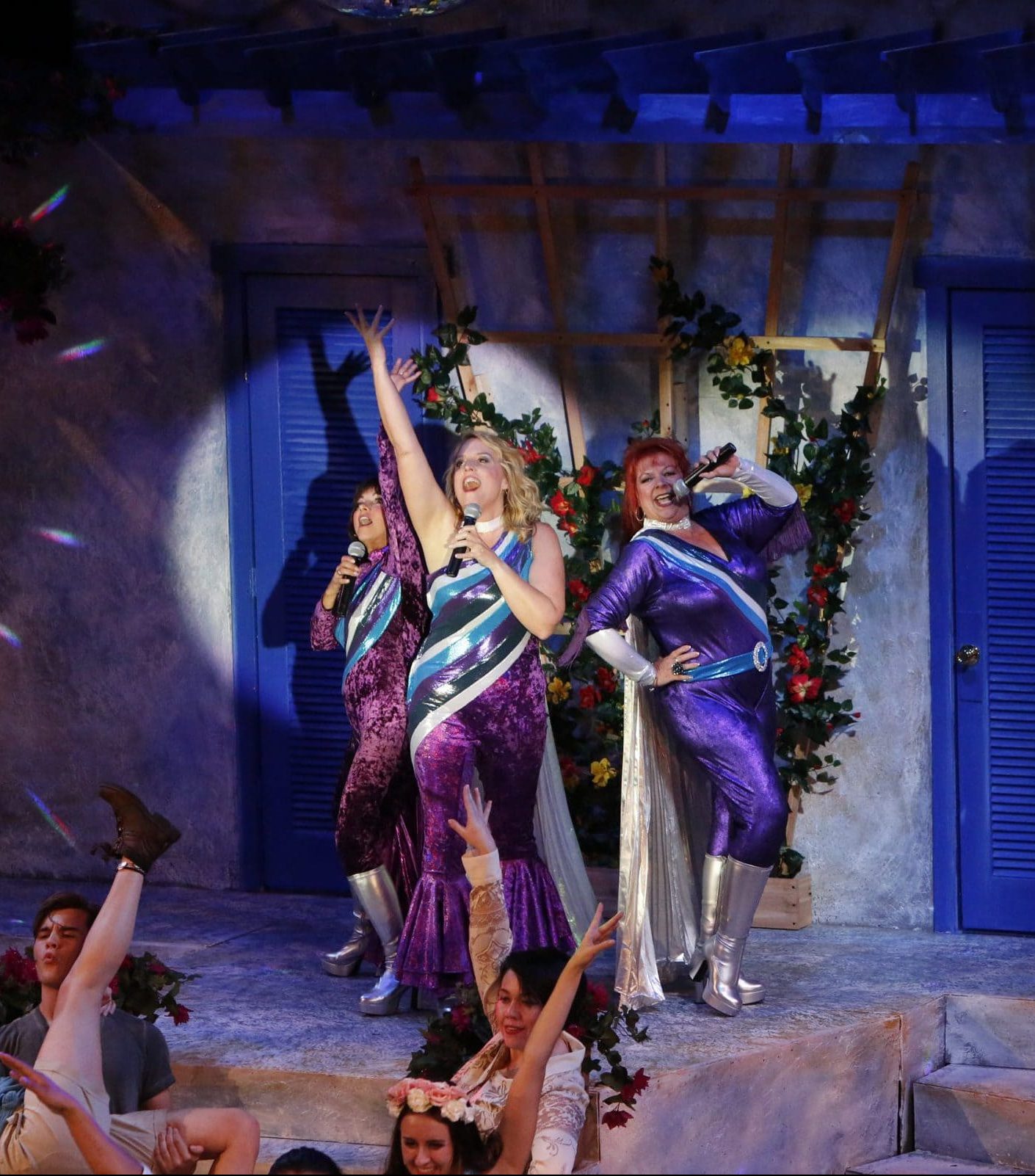 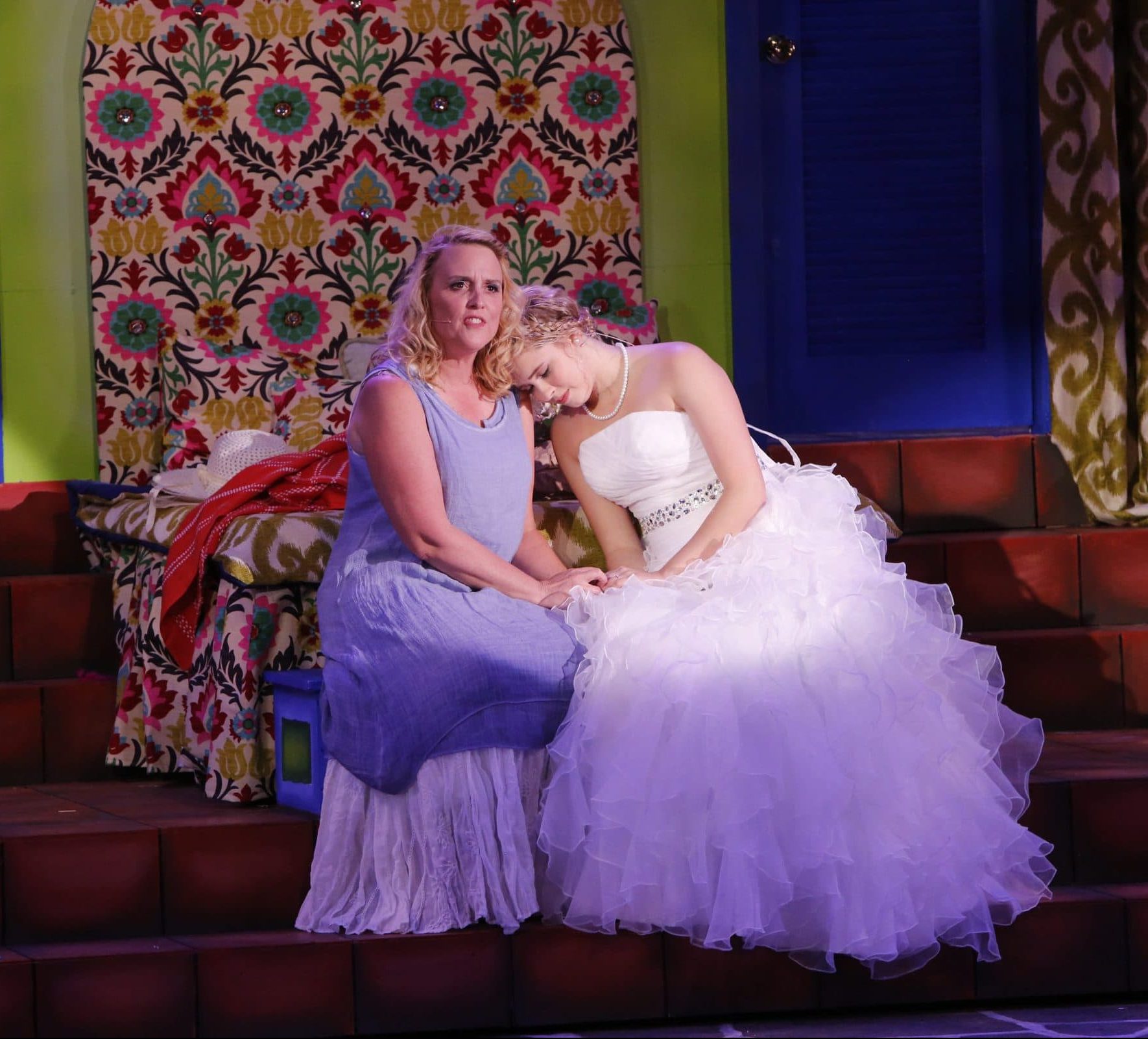