For more than 70 years, Garson Kanin’s 1946 play “Born Yesterday” has remained surprisingly relevant. The comedy about a former chorus girl’s discovery that her wealthy businessman boyfriend is politically corrupt, always seems to tie into something happening in Washington or elsewhere in the world.

And that’s certainly true for the timing of the new Venice Theatre production, which opened with a politically divided nation and Congress dealing with whistleblowers and calls for the impeachment of President Donald Trump.

Citizens clearly are not happy with the way government is working (or not), which may explain why one of the biggest laughs at Wednesday night’s performance came as an attorney laments his struggle to buy political support for the corrupt business affairs of junkyard king Harry Brock.

“That’s the problem in this town,” Ed Devery says. “Too many honest men in it.”

But there are other, less politically oriented laughs generated by Allan Kollar’s genial production. It’s the third version of “Born Yesterday” I’ve seen in the last three years, so there were fewer surprises for me than there might have been for many others in the audience.

But I could still enjoy watching Heather Forte as Billie Dawn transform from a ditzy one-time dancer who cares only about maintaining her pampered life with Brock into an informed, aware and confident young woman who takes control of her affairs. Everything about her changes. She initially looks bored with vacant eyes but becomes more open and almost seems taller as the story progresses.

Billie is helped on the way by the gentle coaxing of Shawn Genther as reporter Paul Verrall, who is hired by Harry to teach Billie the ways of Washington, so she might be a stronger asset as he tries to buy influence with congressmen and senators. Genther doesn’t command the same attention of his co-stars, but has a friendly, encouraging manner with a slightly sardonic tone. Along the way, Paul and Billie fall in love.

Harry, played by Venice Theatre stalwart Neil Kasanofsky, isn’t expecting the change he encounters as Billie pours through books, tours art museums and listens to a wide variety of music in a quest to make up for lost learning time.

Anyone who has seen Kasanofsky in countless previous performances, knows that aside from the fact that he’s years older than Harry is supposed to be, he is perfectly cast as the irascible, gruff and uncouth businessman. The actor wonderfully embodies Harry in the way he barks orders at subordinates or bellows threats of physical violence and quickly shifts to a calmer attitude in his awkward efforts to charm more intelligent and cultured people.

Jimmie Choate conveys a world-weary attitude as Devery, the attorney who long ago sold himself out to support Harry’s crooked business interests. As Senator Hedges, who has taken advantage of Brock’s largess, Gene Callan combines a slight air of power combined with the nervousness of someone who knows he could be in trouble. Lynda StJames projects a sense of grace as the senator’s wife. Dennis Berkery has a lot of running around to do as Harry’s lackey (and cousin), Eddie.

Even before the lights go up, you know you’re dealing with a world of wealth from the elegant two-story hotel suite set created by Tim Wisgerhof, with its marble-looking finishes and well-appointed furnishings. That feeling is matched by Francine Smetts’ period costumes, which often glow under John Michael Andzulis’ bright lighting.

Kollar sets a comfortable pace and allows the actors to grow as their characters adjust to new situations, while reminding us in a humorous style, how important education is for the future of our democracy. 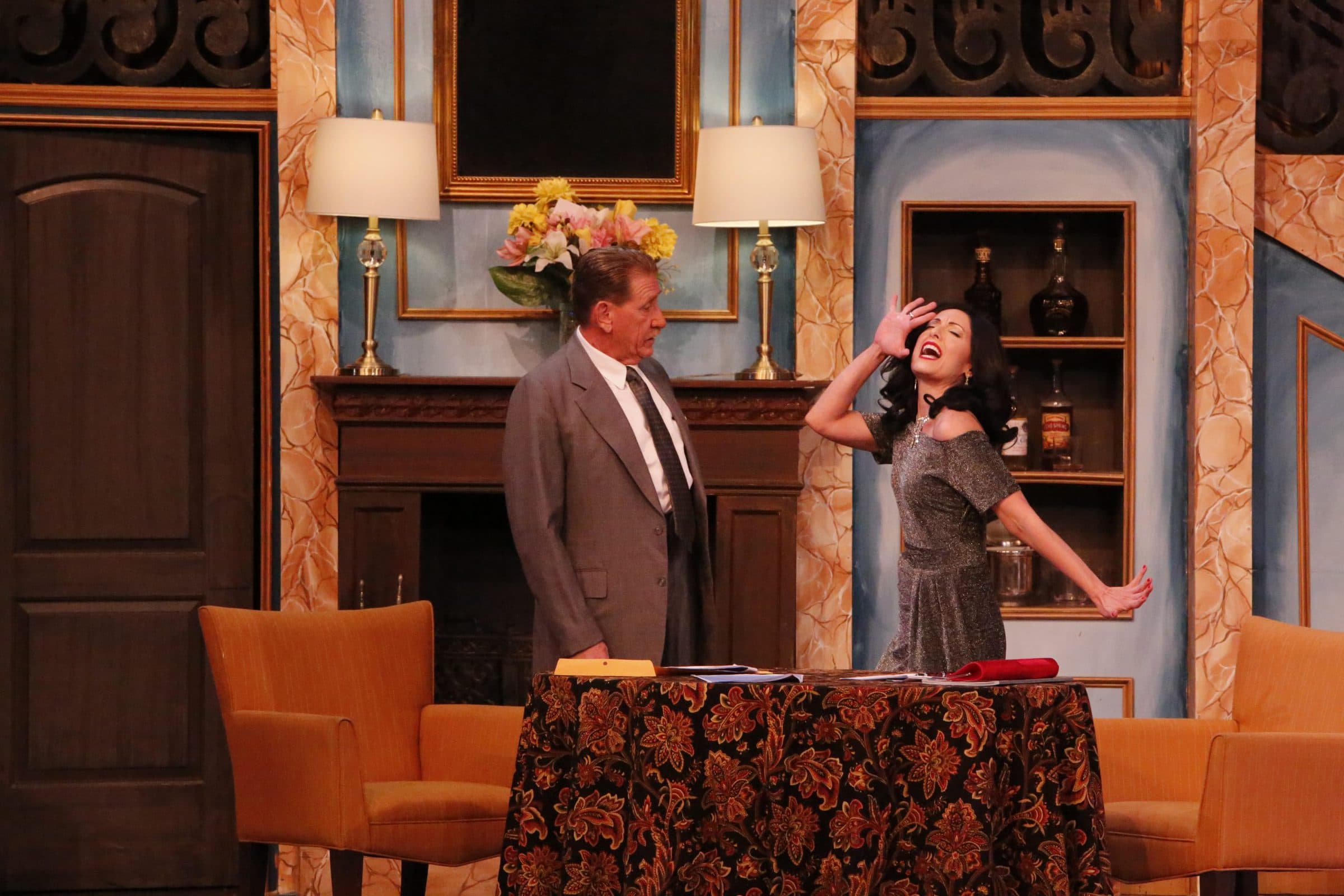